ClimateTalks.Org is a process oriented climate study of the perceived climate experience of people around the world. The aim is threefold:

1. To enhance climate awareness locally through conversation and interaction with people at a basic level. All people involved are randomly picked. After an open dialog about their experience and understanding of the climate, a world globe is inflated as a ritual ending to the conversation. This is to make the experience memorable, and stimulate continued conversation with friends and family later on.

2. To document the stories and unite them in a greater story of mankind. The interviews are based on the principales of the norwegian professor Steiner Kvale on Qualitative Research Methods, with easy, clear and short open-ended questions. (See list at bottom of page). This website is the first stop on the “road” of documenting the stories and the people behind them. The website does not include all the stories, but is focussed on the process of the project. The stories are “saved” for a book later on, and other plans are in the pipeline. Until then, enjoy the images of the beautiful people from around the world:o)

3. To unify people from around the world in an understanding of the challenges mankind is facing. This is done through exhibitions and presentations where the documented stories along with movies and photos are relayed. Every year the project goes to the UN Climate Conference (COP) and does an exhibition. Not as part of the official Conference, but in a public area, like a Square or street. The exhibitions are for the people, of the people and essentially by the people:o) So if the UN COP is Top-down, this project is Bottom-up. 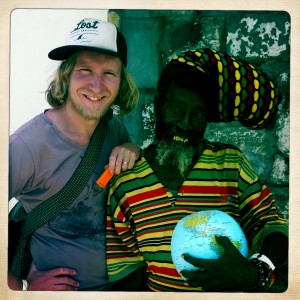 As an artist, I have worked broadly in the creative field. From theater and dance performances, small and big scale art installations, film and music videos in front and behind the camera, photography and painting… The creative expression is what matters to me. The medium is irrelevant.

My father, Ronny Jaques, was a photographer always traveling the world, and he planted a seed in me to do the same. His death sparked my beginnings as a world traveller. However I needed purpose for my journey, and so I started my climate project.

With all the top-down scientific material in the academic world and in the political arena (with its sometimes latent deductive reasoning), I wanted to make a bottom-up inductive approach, focussing on the “ground floor” where normal people live and work. And I wanted to just be one human talking to another human, keeping the conversation simple and straight forward. I would ask open ended questions and say as little as possible, letting them do the talking and hereby keeping the conversation as truthful and honest as possible. And so it was;o)

The project started out loose in form, with a focus on just talking to people about climate issues and local challenges, but always with the “artistic” ritual ending of inflating the globe and taking their picture. However, I soon realized that people where telling me stories I had not heard before, and I started documenting in more detail and insuring that a few certain question where asked every time, to make sure I got the full story and make the stories comparable .

Five Years later, around 500+ conversations have taken place in 90+ countries. Every conversation is a little piece of a puzzle. A puzzle where you do not know what the full picture looks like. I have slowly started to put the puzzle together and it is fascinating and interesting to find correlation between conversations that are worlds apart and find that certain words are used in almost every conversation.

I do not like locking in on a certain outcome, but rather letting the process and in this case the stories show the way. I am already doing exhibitions under the name WorldUnite.Me, with the photos every year around the UN COP meetings.

Since 2008, millions of people have seen the Exhibitions around the world. The pictures below are from the UN COP15 in Copenhagen on City Hall Square, where the images were projected on an interactive 100 foot large globe, and on exhibition at night during the 10 day long UN Climate Conference. 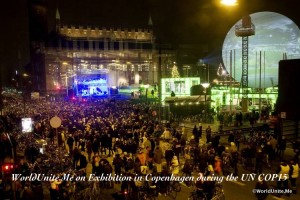 In the future I might make a book, a Tablet-format interaction, documentary, presentations…. Time will tell:o) For now I am still focussed in the conversations:o)

(However, I am deeply inspired by “The Story of Stuff“, and their way of telling a story. If you have not seen it, you should. You can find it by clicking right above or by going to the links section.)